Yelp’s SoMa HQ Is All About Celebrating Small Businesses

The lobby below Yelp’s San Francisco headquarters is surprisingly stately. You enter through bronze doors. Inside, the ceilings are high and, above the elevator bank, terra-cotta-hued plaster, decorated with mythical-looking winged creatures. (You can see a close-up on Yelp, fittingly enough.) The whole space feels like a relic of another time.

It is, actually. The building first opened its doors back in 1925, and many of its features, including the plaster ceiling, are artifacts of that era. Back then, the building housed the Pacific Telephone and Telegraph Company, and major strides in telephone technology happened on the premises. In 1929, Winston Churchill called his house in London from there; it was one of the first-ever transatlantic phone calls.

Yelp is no phone company, but Internal Community Manager Uli Bilke sees echoes of the building’s past in its present.

“The phone company had the phone directory,” he told Built In, “and now we are the modern phone [directory], where you can find everything.”

Yelp has improved upon the phone book too. The hard copy version could help you find a restaurant, but offered no insights into the quality of the food. Yelp not only offers reviews of the food, but sometimes photos of the plating.

So, what’s it like to work at the 21st century’s directory of everything? We toured Yelp’s historic HQ to find out. 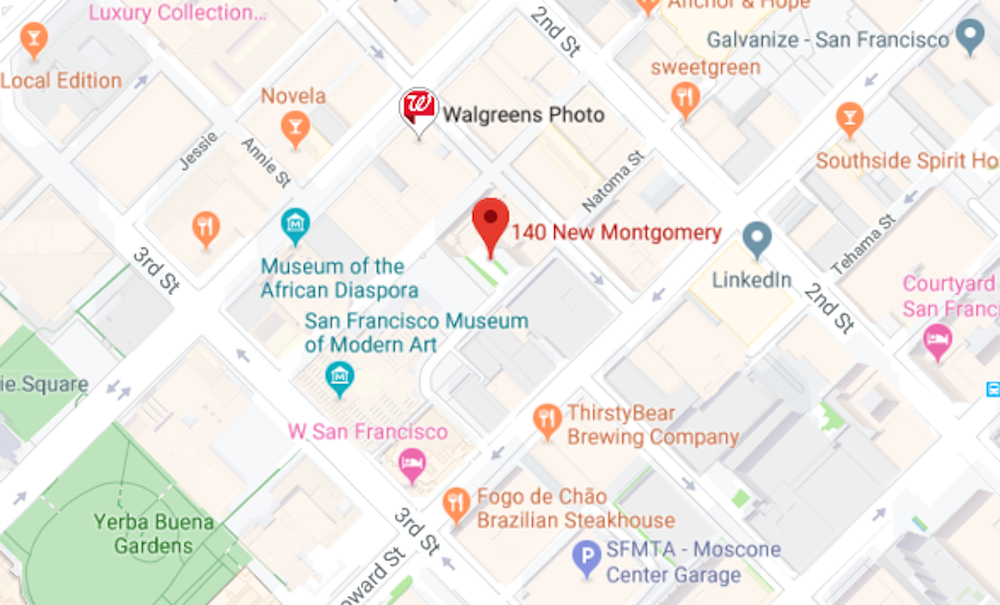 The current HQ is Yelp’s third office in San Francisco, but the company has always been loyal to SoMa — in fact, all three of its offices have been on the same block. The company moved into this particular office on New Montgomery Street, which spans a total of 13 floors, back in 2012. Like all of Yelp’s old offices, it’s walking distance from the Montgomery Muni station and various bus routes, including the 10, 30 and 70. 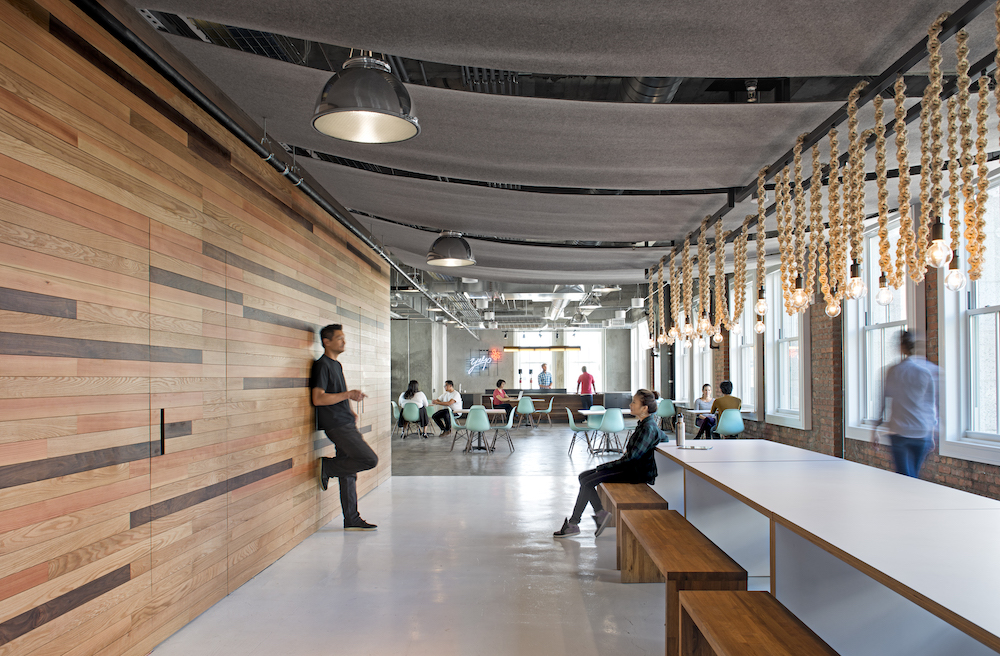 Yelp has a little over 1,000 employees at headquarters, and they’re all over the map. “We have any kind of role that exists in the company,” Bilke said. The team tilts heavily toward engineers, but people in finance, product, marketing and HR all work here too.

Yelp aims to connect users with great local businesses, and it’s obvious from the office. The conference rooms are all named after different Yelp categories, with monikers like “Yoga Studio” and “Library,” which has book-spine wallpaper. Meanwhile, the reception area looks like a business in its own right: a general store stocked with mittens, gum, Yelp “burst” logo keychains and more. There’s a cash register at the front desk, but it’s more prop than infrastructure — most of the swag is free.

The employees even signal boost local businesses in their face-to-face interactions. Bilke recommended his favorite Mexico spot to us on our way out: a Mission mainstay called La Taqueria. (When we went the next day, we surreally got a fresh rose with our burrito.)

Not only is Yelp devoted to local business — it’s devoted to its employees. Highlights of work life here include... 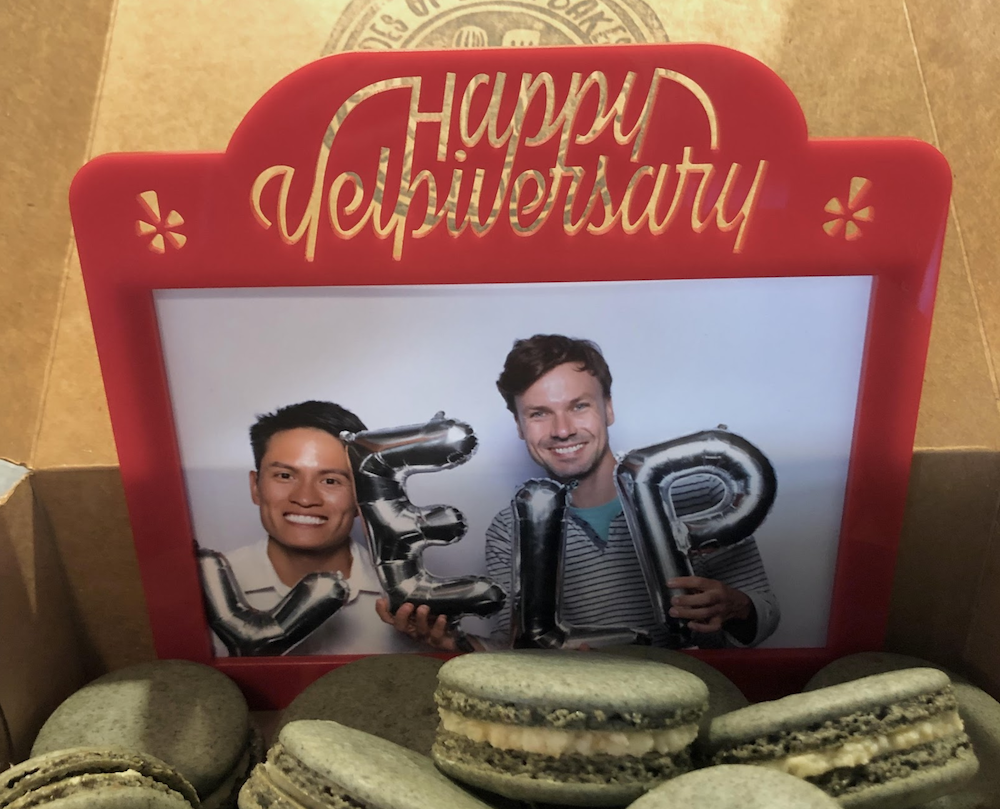 People who work at Yelp have birthdays, like normal people, but they also have annual employment anniversaries, or Yelpiversaries. These are birthday-sized occasions; in the weeks leading up to a Yelpiversary, their face appears in an anticipatory slideshow projected throughout the office.

“People are so passionate about it,” Bilke said.

When the day arrives, there’s a group Yelpiversary party. Held every two months, these parties are catered affairs where each honoree gets a special gift. At a recent one, Bilke said, honorees posed for photo booth photos with prop numbers representing their, uh, Yelp ages. They could display the resulting photostrips in their Yelpiversary gift — a frame made by a local artist. 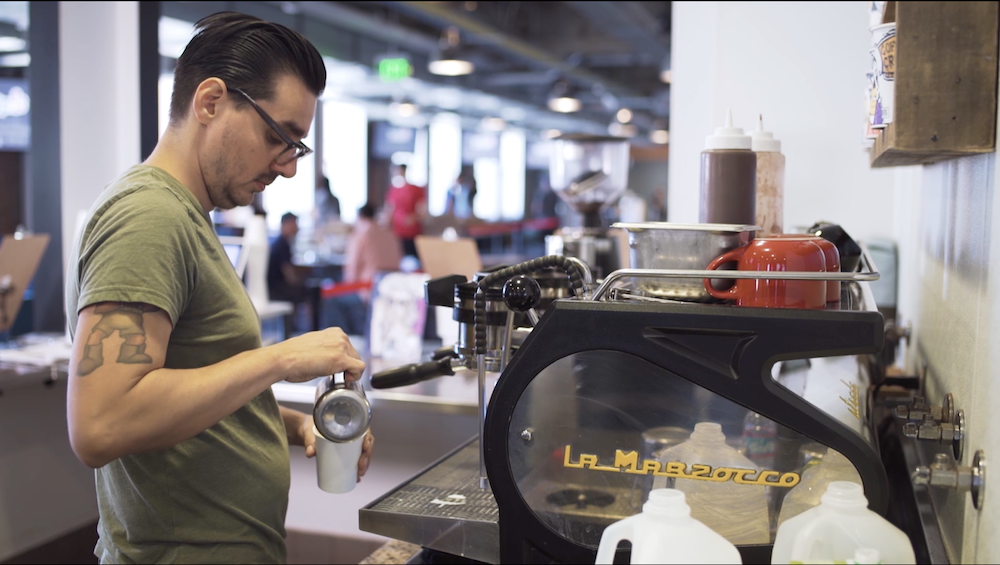 Much like the reception area’s general store, Yelp’s coffee shop looks like a real-life coffee shop, with booth seating and bearded baristas. The only difference is that everything’s free, from the espresso classics to the tumeric lattes and chai. In keeping with Yelp’s mission to support local businesses, the cafe sources its coffee beans from local roasteries, and changes providers quarterly.

The fully stocked fridges in Yelp’s kitchens brim with everything employees need to make their own Yelpwiches (read: sandwiches). For anyone feeling creatively stumped, there’s an intranet page, Yelp Test Kitchen, where employees exchange sandwich recipes. One Yelper has dreamed up a sandwich version of eggs Benedict; Bilke, for his part, prefers to combine Yelpwich ingredients with his own homemade bread and sauerkraut. 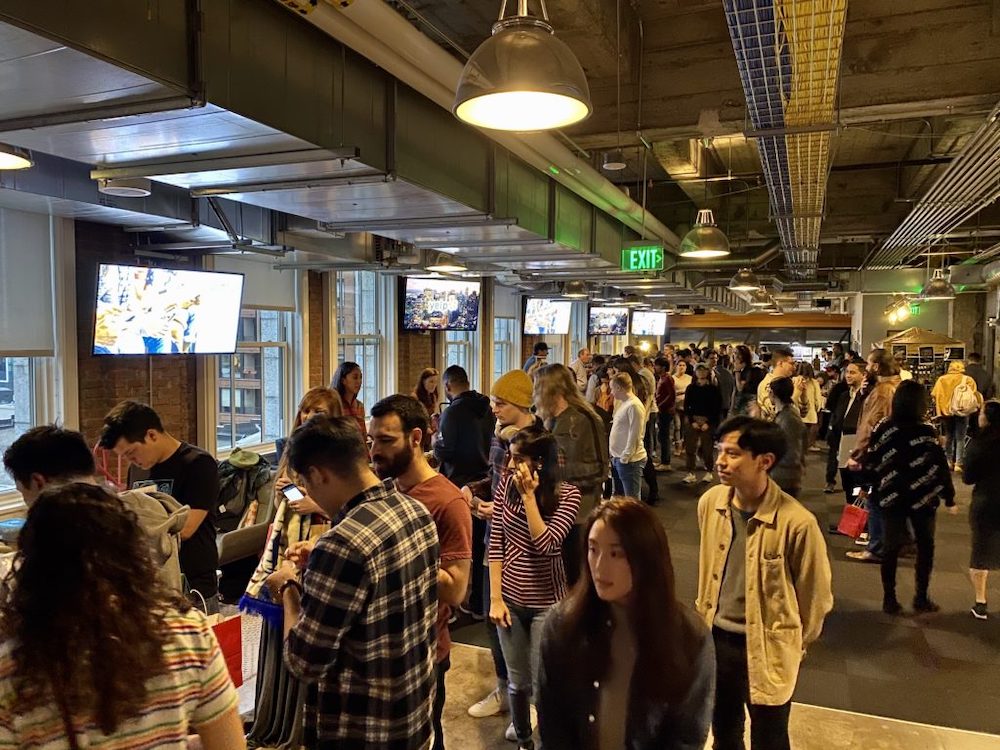 To celebrate special events, like Pride Month or the holidays, Bilke invites vendors from Etsy, farmers’ markets and the like into Yelp HQ for pop-up markets. When Built In visited, Yelp had just hosted its holiday market, featuring 25 local vendors. The most popular one sold chutney, and, according to Bilke, “people were lining up and trying different sauces.” This was in spite of the fact there was nothing to put the chutney on. People spooned it straight into their mouths, and with gusto. 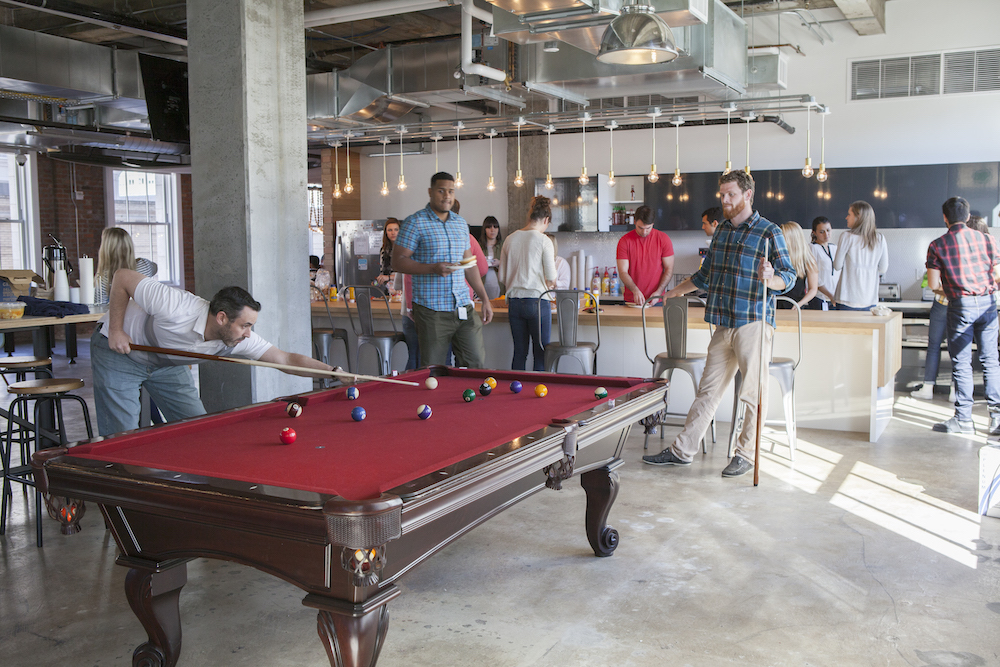 The beer on tap

It wouldn’t be a tech office without a keg in the kitchen. Yelp tries to match the beers on tap to the season — during Pride month, for instance, they tapped a “glitter beer” from a LGBT-owned brewery, Bilke said. (It didn’t contain actual glitter, which is probably for the best, medically speaking.)

Though some employees assume the bar is always open, Bilke has news: It only opens at 5 p.m. It’s a very popular after-hours hangout spot, though.

“Thursday and Friday night, it’s the place to be,” Bilke said.

Yelp’s Green Team works hard to keep HQ’s plastic waste to a minimum. The group of eco-conscious employees bought up multiple Goodwills-worth of secondhand thermoses, utensils and more, so no one in the office has to rely on disposable dishes and cutlery at work.

The team has also tried to reduce the office’s single-use plastic consumption by brokering a partnership between Yelp and Dispatch Goods. This growing container company furnishes the employees with reusable stainless steel takeout containers, which they can use to pick up snacks at nearby businesses. Once they’ve eaten, they drop their containers in a receptacle that looks a bit like a recycling bin, and the dispatch team cleans and returns them to the office. 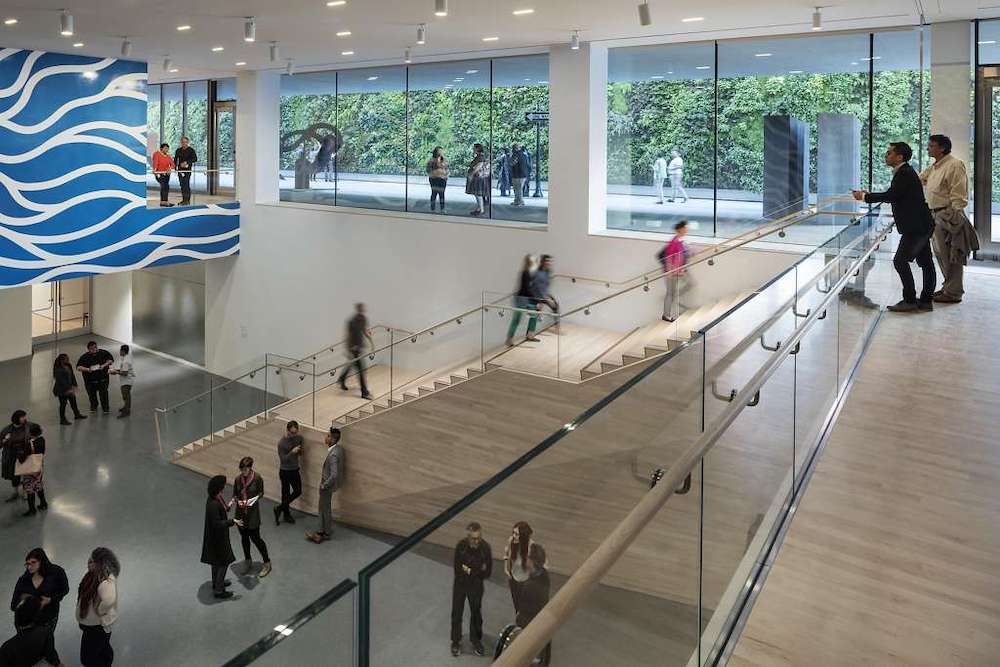 Yelp HQ sits a two-minute walk from San Francisco’s Museum of Modern Art, and all employees can show their Yelp badges to get free museum entry for themselves and a plus one. Bilke often sees Yelp employees having one-on-ones with their managers in the galleries, or working remotely from the museum’s open-air terrace. 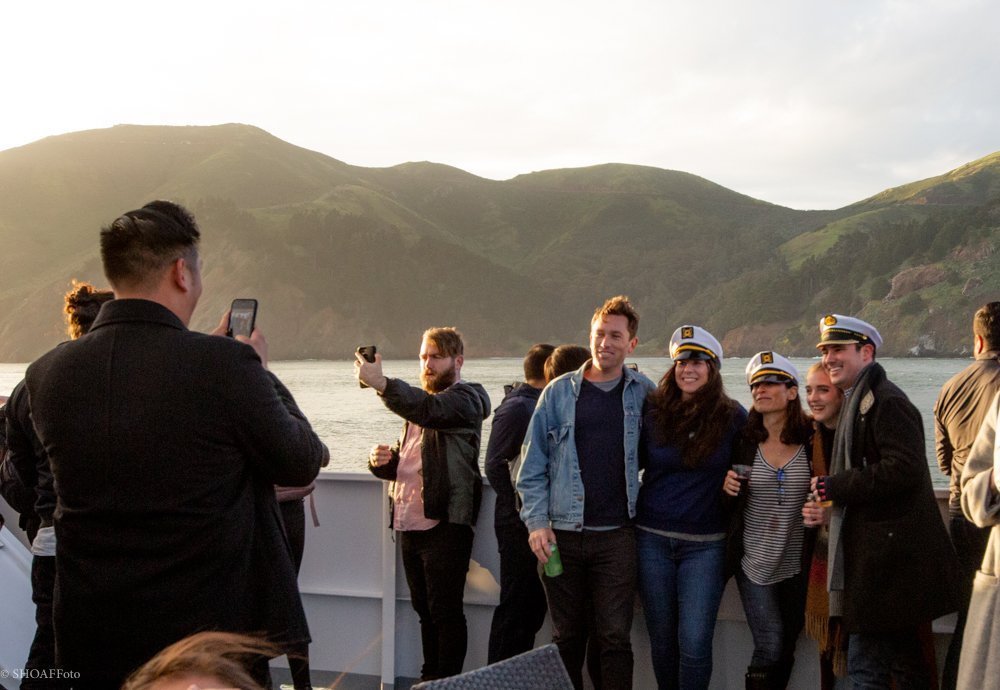 Even people who work at Yelp don’t know exactly how a user joins the Yelp Elite — a squadron of upper-echelon Yelp users who get invited to special Yelp events. (They also occasionally marry each other.)

Users can nominate themselves or others for Yelp Elite status, Bilke said, and successful nominees have certain things in common. They use their real names on Yelp, upload well-lit photos and review stylishly and prolifically.

Ultimately, though, a secret council decides who gets Yelp Elite status, and no one knows who’s on it. Not even Bilke — and he’s worked there for 10 years.