Twitter’s headquarters and Twitter’s platform blur together sometimes. Exhibit A: In The Commons, the dining-area-slash-all-hands-meeting-room in Twitter HQ, framed tweets hang on the walls. Fittingly, they all describe Twitter.

“Twitter is a unicorn-meat taco within a dream,” says another.

The messages are goofy, but they also reflect reality — Twitter is hard to describe. Back in the late aughts, when the social media platform was first founded, no one knew what to call it. News items described it as “the Youtube of 2007,” “a free communication service” that “takes instant messaging to an extreme” and a “‘microblogging’ communit[y].”

(Yes, “microblogging” was in scare quotes.)

Now, though, Twitter needs no explanation. The general public knows a tweet when it sees one. This is a sign of the platform’s astronomic growth over just over a decade — from an idea to a platform with more than 140 million daily active users.

It also just makes sense that the public understands it. That’s who it’s for. Twitter is ”about enabling public conversation,” according to Tracy Hawkins, the company’s global head of real estate and workplace. “That’s why we’re here.”

That public conversation isn’t typically about Twitter, either. The platform has enabled discussion around major social issues with hashtags like #BlackLivesMatter, #MeToo and more. It’s helped activists mobilize against authoritarian governments.

It’s also a fountain of anecdotes, memes and insights from Cher.

So what’s it like to work at the hard-to-describe yet easy-to-use social media platform? We toured Twitter HQ to find out. 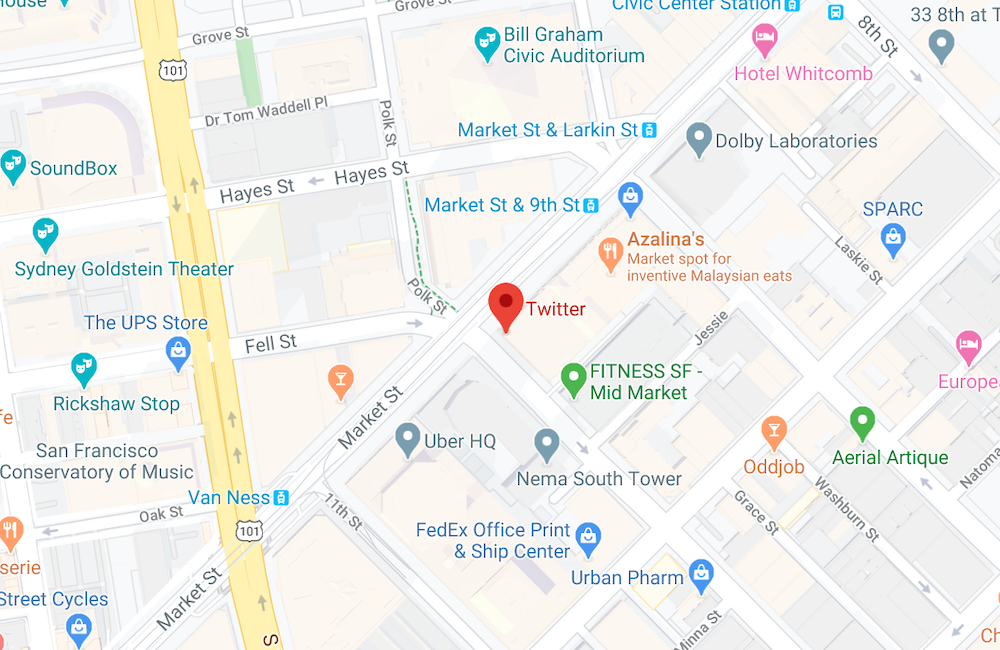 When Twitter moved in, back in 2012, it was the first major company in the neighborhood and “this area was very depressed,” Hawkins said. Through Twitter for Good, the company gives back to the area with initiatives like the Neighbor Nest, a community center with digital literacy workshops, a daycare and more.

Twitter’s San Francisco headquarters houses about 2,500 employees, about half of them engineers. The rest span all of the company’s functions, from sales to HR to real estate and workplace. However, Twitter embraces remote work too — on our tour, we pass countless video conferences.

Twitter doesn’t have a global design standard. Instead, each of its offices is a unique product of its city — though not in an obvious way.

“We don’t do things like ‘Hey look at this picture of Golden Gate Bridge’ to show we’re in San Francisco,” Hawkins said. “We go out to local architects and local companies so we can get folks who really know all the best vendors in the community.”

That translates into local accents throughout headquarters, like tiling from Sausalito and wood salvaged from the old Transbay Terminal.

Even the buildings showcase San Francisco’s architectural history. Headquarters consists of two wildly different buildings from two different eras: a squat art-deco cube from the 1920s, with floors the size of a full city block; and a newer, slimmer building across the street, which dates back to the 1970s.

A futuristic, window-lined skybridge connects the two, and it might be the most local touch of all. Because San Francisco is notorious for its earthquakes, it took longer for Twitter to get permits for the bridge than for either office’s buildout. The finished bridge can withstand moderate quakes — it’s flexible, like Twitter’s design standards.

Twitter’s logo, a blue bird, does crop up throughout the office in signs and statuary, though,  reminding visitors that headquarters is part of a larger entity. It’s larger, even, in fact, than the city itself — Twitter’s user base is more than 100 times the population of San Francisco.

Here are some highlights of our tour of Twitter HQ.

The Architects Plunked an Entire Montana Lodge in the Common Area

One common area at Twitter features a room within a room — or, more specifically, a lodge within a lounge. The structure above was once a standalone wooden lodge in Montana. Twitter’s architects found it on Craigslist and transplanted it into the office.

Hawkins emphasized that the lodge is more than cool. It’s also a space for collaboration.

“We don’t do things like ball pits and slides,” she explained. “We do fun things, but everything is functional.”

Twitter has three cafeterias scattered throughout its office, serving free gourmet lunches. Popular dishes include pizza, salad, fresh fruit and — Hawkins’ favorite — rotisserie chicken. Though many Twitter conference rooms are named after birds, “it’s not like we’re averse to eating the odd bird here,” she joked.

The culinary team works with locally sourced ingredients whenever possible too — including herbs sourced from a cupboard-style garden right in the cafeteria.

Twitter often translates hashtags into art installations. The neon cursive sign, pictured above, which reads #LoveWhereYouWork, commemorates a hashtag started by a beloved early Twitter employee. Other installations pay homage to hashtags like #BlackLivesMatter and #LoveIsLove.

Though the neon is simple enough, some installations get quite complex. The rainbow-hued #LoveIsLove tapestry, for instance — a celebration of LGBTQ pride — is made of Peruvian wool stretched around more than 6,000 nails, according to creator Knits for Life.

On an overhang above The Commons sits Twitter’s coffee shop, #ThePerch. Once a space Hawkins described as “gray and old,” it’s been redesigned. Today, it has a black ceiling and walls covered in murals by artist Shantell Martin, in which faces, hills and inspirational messages fuse into a surreal, line-drawn landscape.

Back when the team was conceptualizing the space, Hawkins said she wanted it to feel like “a cool cafe” — and so happening enough that she couldn’t get a seat in the afternoon.

Her wish came true. “I generally can’t, which is so annoying,” she joked.

That’s thanks to the baristas’ delicious coffee and occasional surprise deliveries from the culinary team, like free brownies.

Employees Can Sunbathe While They Work

Twitter employees can work from the headquarters’ rooftop deck, a breezy space that often hosts company events — like a recent family friendly yoga class on Bring Your Kids to Work Day.

The outdoor space is dotted with cornhole gear and local plant life, especially succulents and “things that can withstand the lack of rain,” Hawkins said. (San Francisco is prone to droughts.)

Twitter installed the deck when it moved into the building, and it’s a real testament to their landlord’s open-mindedness.

“Our landlord let us cut the roof off,” Hawkins said.